Composer improvisor multi instrumentalist, player, sound artist …
Cyril Hernandez is all this at the same time but he prefers to present himself as a musician…
Without vanity, the most important for him is the music, the one that accompanies his daily life, the one that nourishes his point of view  of the world, and animates his dreams.
His company named La Truc (the thing) is opened to artists from different kinds of style , multi faceted, ready to create works crossing artists genders (circus, dance, theater, puppets), works where body and space are highlighted.
Player, Cyril Hernandez played with Pierre Boulez,.Steve Reich, Marta Arguerich…Explorer of shapes and sounds, he is willing to flee from conventional places or theater to land in public space with his original performances and installations. In 2006 came his first MobilaSon (mobilSound) presented in 2015 in the Noirlac Abbey, in Rio and in Bogota.
Winner of the french foreign office project “Villa Médicis-Hors les murs” he lived 6 months in Brasil between 2007 and 2008, where he played his ImaginaSound. In september 2009, he was invited to Salvador de Bahia to the PercPan, world percussive festival, by Marcos Suzano, the most famous Brazilian percussionist, artistic director of the event, who recognises in Hernandez, one of the most inventive contemporary musicians. Other destinations Mexico, Paraguay, Japan and Cuba.
During each trip, he discovers rhythms news textures and sounds, which feed his creations and projects.
Since 2016, he works with Emmanuel Labard, french designer and videast, they create in 2019 Cosmophonies, Eclipses and Cosmographics Portraits. He 's preparing SUR TERRE (on earth), his new création for theater and La Traversée (crossing) a musical trip and an artistic performances which will cross Paris in septemer 2021.
Speak with him about futur, he will talk about desires meetings, travels, people too, unknown, unheard, because music is still a space to play with and to explore. 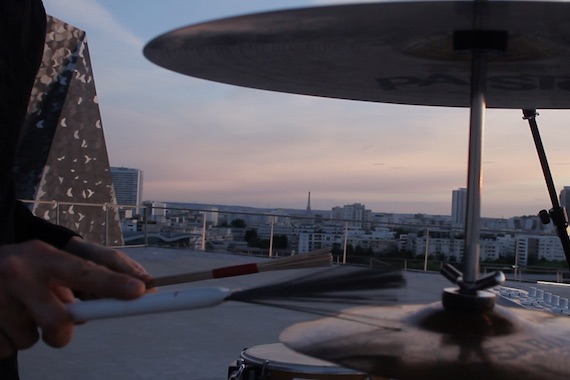